When one thinks of external USB storage devices, the overabundance of single-drive solutions that exist on the market from Tier 1 manufacturers typically come to mind.  The variety of offerings may come in various shapes and colors, yet all suffer from the associated risk of placing all of your digital assets upon a single point of failure.  While multi-drive applications normally reside in the domain of network attached storage (NAS) appliance from a handful of manufacturers that target the consumer and SMB markets, the potential complexity of setting one of these solutions up may be excessive for scenarios where locally attached storage will fit the bill at a more reasonable price point.  As we’ve discussed the challenges that stem from data caps from unscrupulous broadband providers earlier this year, the concept of mitigating the risk of a single disk for digital media is one that shouldn’t be taken lightly.  We’ve recently cycled out four 3TB WD Red drives that were supporting general purpose file storage via an allocated pool within FreeNAS.  The drives are coming up at the end of the warranty period, and the initial experience with this make and model was less than favorable.  Within the first year, we encountered a failure rate of 60% which resulted in two of the initial drives providing service alongside two factory refurbished units.  Subscription services such as XBox Live and Playstation Network offer customers free titles each month, which is a blessing and a curse.  Our XBox One’s paltry 500GB drive was over 80% full after three months of downloading software entitlements.  Deleting and downloading again at a later date would incur enough of a penalty against any data cap restrictions.  As both current-generation game consoles support external USB storage, the potential to store the associated digital media externally on a mirrored pair of disks was intriguing.  For this application, we selected the Mediasonic ProRAID HUR5-SU3 solution. 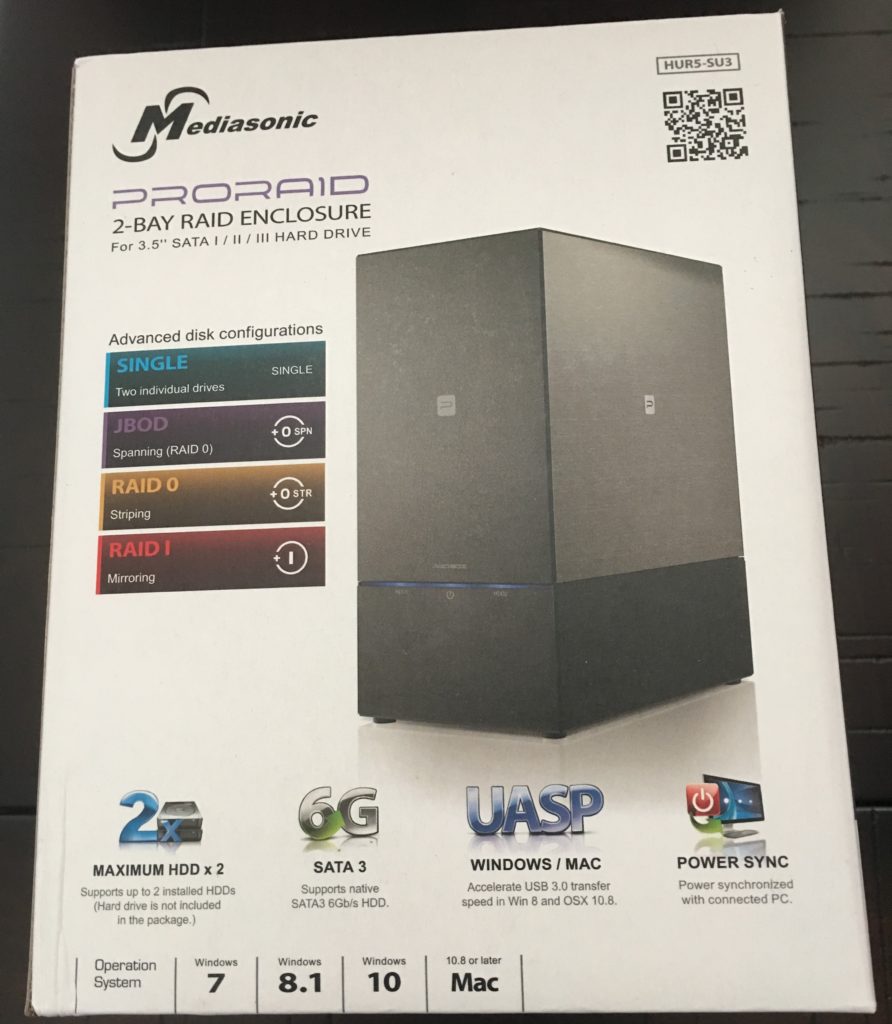 The compact packaging for this enclosure is well designed and there were no challenges encounterd when all components were being removed.  As the packaging advertises, this unit is capable of presenting two distinct drives to a given operating system.  In addition to this baseline functionality, two methods are provided to establish RAID 0 capability.  For use cases where performance ranks higher than resiliency, the ProRAID enclosure provides options to maximize capacity and speed.  Testing and setup performed by Reztek Systems focused on the implementation of a mirrored configuration.  Taking a peek inside of the top of the box, the following image is indicative of what will greet your eyes at the start of the unpacking process. 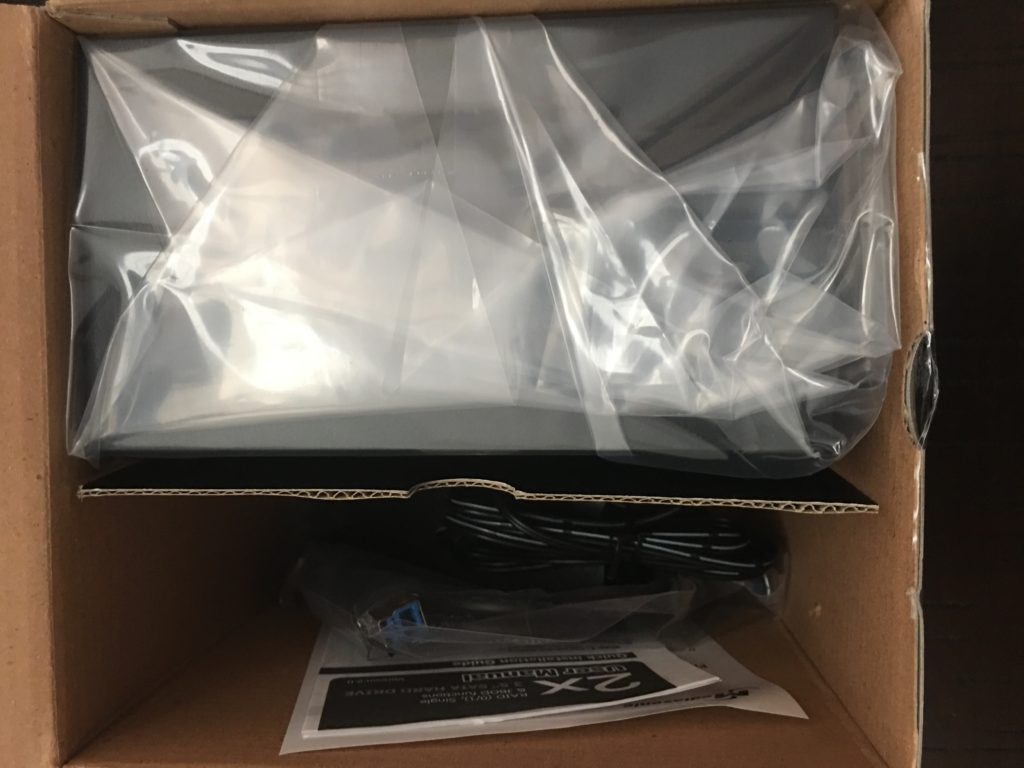 One compartment contains the enclosure, which is adequately sealed in its plastic wrap.  The second compartment contains a USB 3.0 cable, the power supply (external brick form factor), the necessary drive mounting screws, a package of labels, and two pieces of literature.  Removing everything from its wrapping and taking it all out of box highlights what’s included in the kit. 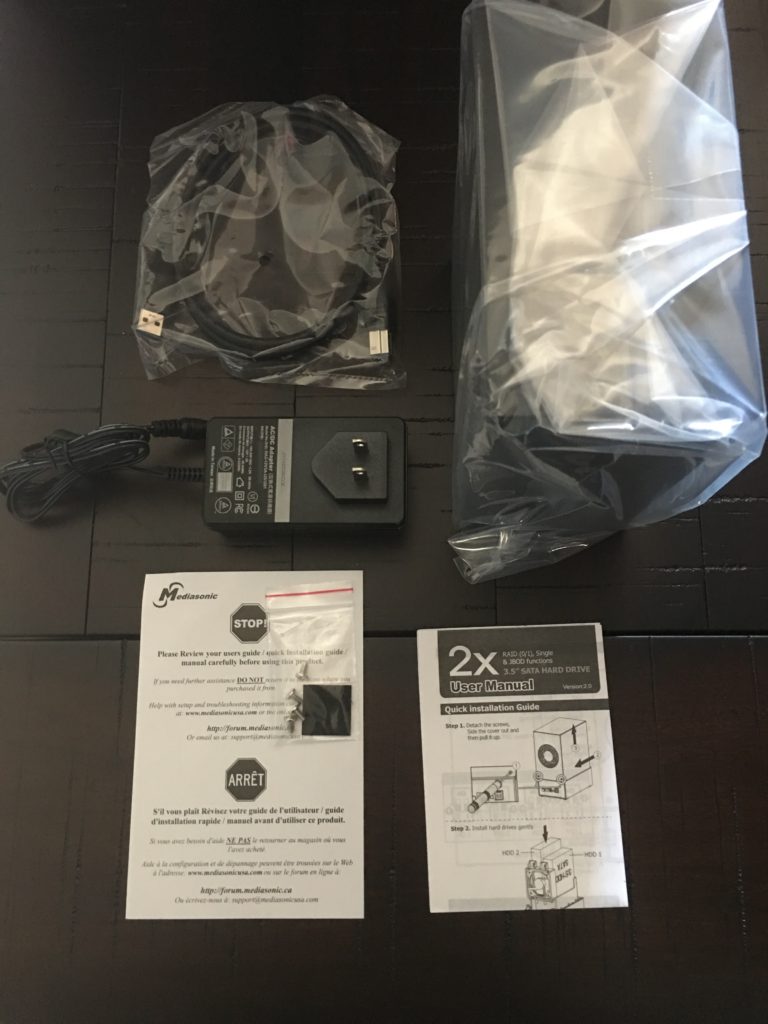 The setup process is well covered by the user manual.  In summary, two screws are removed from the back side of the enclosure.  The top pops right off, which enables the insertion of up to two 3.5″ SATA III hard drives.  The maximum drive capacity supported by the controller in this enclosure is stated as 8 TB.  As we do not have 8 TB or 10 TB drives to test with, we’ll take Mediasonic’s word on the noted limitation.  The physical drives are inserted perpendicularly to the base, and they slide right into the SATA connections on the enclosure’s back plane.  While the drives may require a minor push down once everything’s aligned in order to firmly seat into the connector, no brute force is required nor necessary.  Some minor adjustments are possible once the drive is seated, which allows the installation of the screws that secure the drives in their respective slots.  Upon securing the drives, the top of the enclosure can be reattached using the two screws that were removed at the beginning of the installation process. 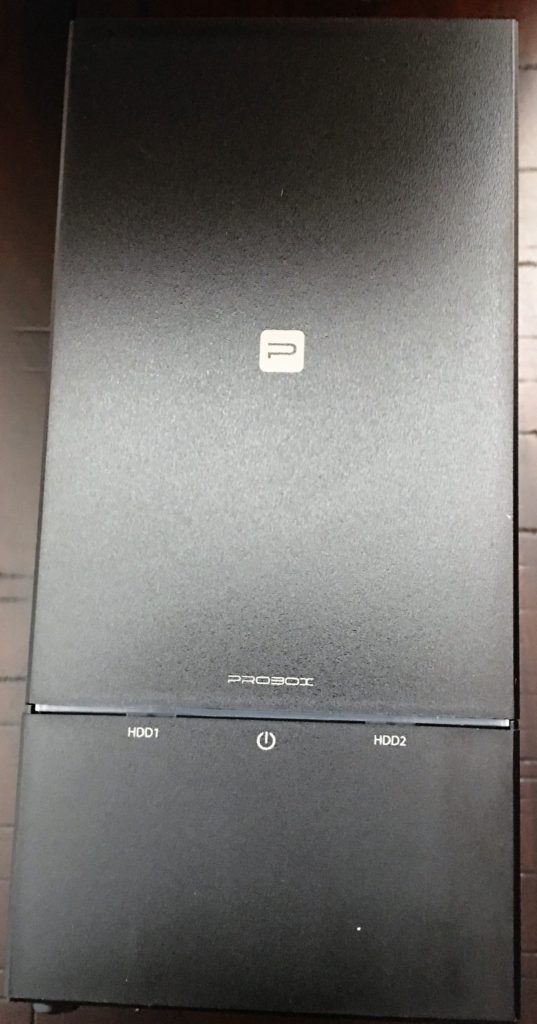 The front of the unit possesses a matte finish, with a slim LED bar that indicates each drive’s activity along with a status indicator for power.  The bulk of the configuration and logical setup for the disks involves adjusting switches on the back of the unit. 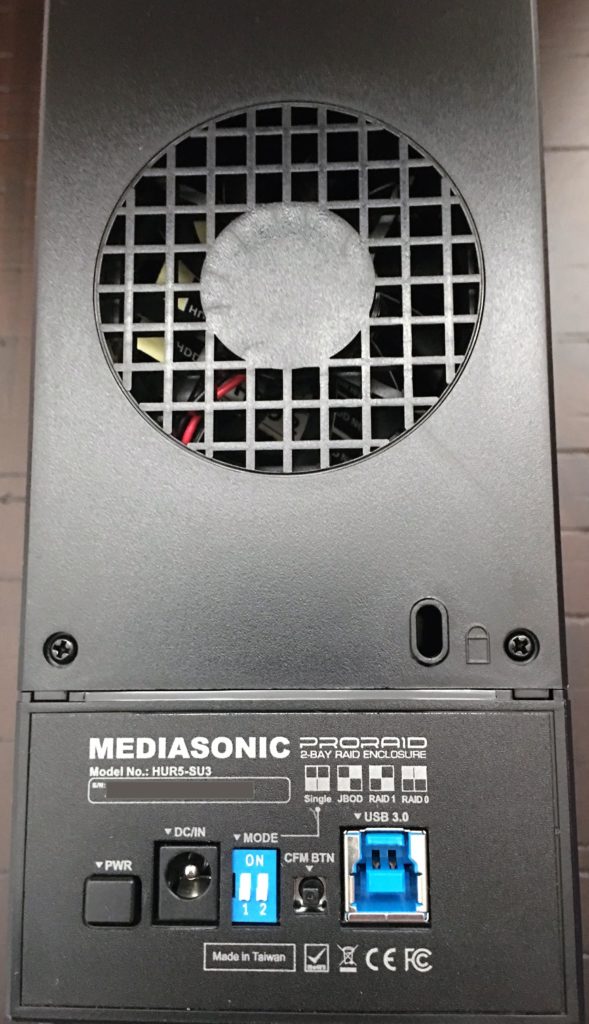 The legend provided above the USB 3.0 port ensures that the disk setup can be configured without the manual.  The positioning of the switches will dictate what mode is being used.  For our testing and setup as RAID 1, switch 1 is set to the ON position while switch 2 is set to the OFF position.  The final step involves a coordinated application of the power button while holding down the CFM button.  Without locking in and confirming the configuration, the disks will display within Device Manager as two independent disks.  Applying the appropriate power on sequence results in each disk’s activity light briefly flashing purple in an independent manner, followed by both activities lights blinking a synchronized purple.  After this completes, the solution is ready for service.  Total setup time, including the disassembly and reassembly of the enclosure, can be completed in less than 4 minutes.  Disk Manager confirmed that a 3 TB volume exists and is usable, which allowed us to relocate these units to the entertainment center that supports the XBox One.

While the price is reasonable for what this solution offers, there are some caveats to consider.  First, the “vinyl” finish on the sides detracts from the aesthetics.  The picture below highlights the deficiency.  While it’s more pronounced with the protective film in place, the appearance would be more consistent if it matched the matte finish and color of the base. 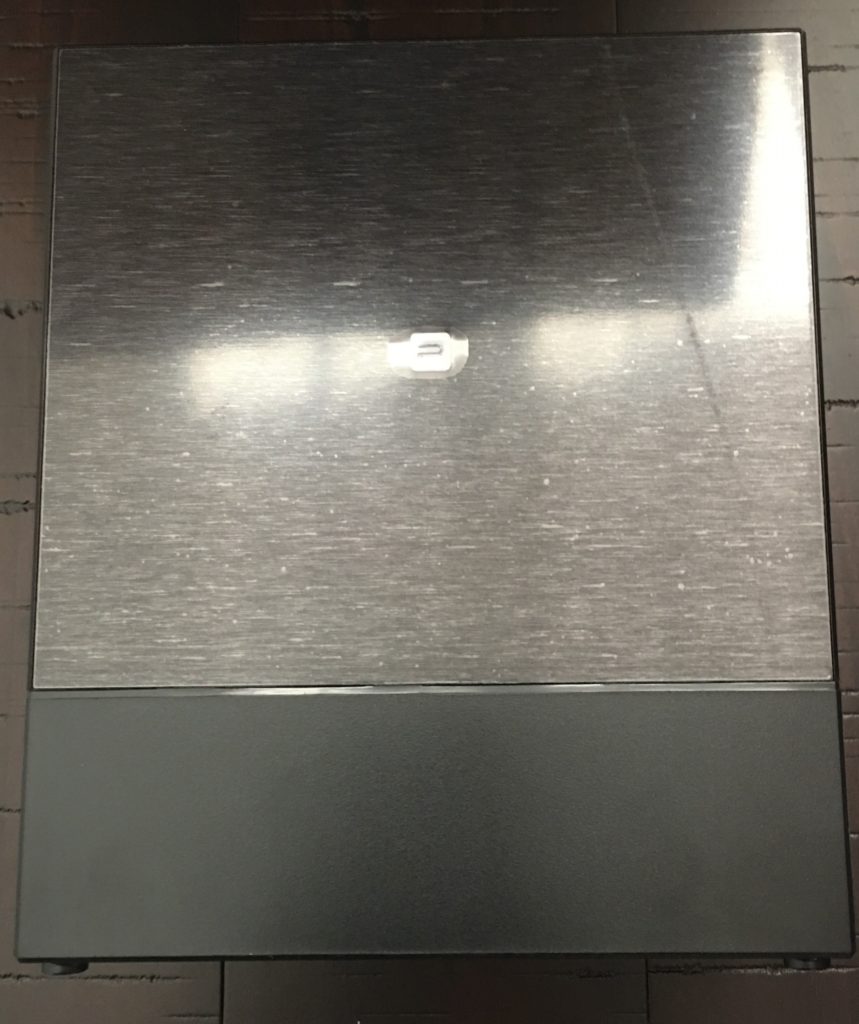 The CFM button location may also be somewhat problematic if your hands are larger.  The close placement to the configuration switches and the power cord require visual confirmation that you’re pressing the button.  Moving the CFM button to the right hand side of the USB 3.0 port would simplify the dual button process considerably.  With these minor gripes out of the way, the remaining build of this product is well thought out.  The LEDs are not obnoxiously bright, and the diminutive form factor allows the enclosure to blend in with its surroundings.  The cooling fan in the rear is not excessively loud, which further enhances the product’s viability in traditional living spaces.  No considerable performance loss was noted in comparison to when the drives were directly connected to an available SATA port in a traditional compute environment.  Being able to use the drives and RAID configuration of your choice empowers the Mediasonic ProRaid HUR5-SU3 to address the majority of applicable use cases.  The minor design quibbles don’t detract enough from the value offered by this product.  If you’re in the market for external, direct attach storage and want to roll your own external storage solution, Mediasonic’s entry in this space is worth considering.