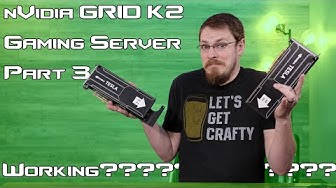 The conclusion of Craft Computing’s series which covers GPU sharing and virtualization ended up being derailed by the paywall of doom known as vGPU enablement. While direct GPU passthrough is feasible yet has its own associated challenges, the underlying effort for taking down-cycled hardware and bringing new life to it is a solid approach for provisioning a distributed virtual gaming solution. Even with the deficiencies present in legacy versions of hypervisors, the outcome was still impressive.

A few years ago, we had undertaken a similar effort for more enterprise-focused applications of this technology. Although the licensing costs associated with the nVidia stack have come down considerably, it’s still a non-trivial barrier to entry for home applications. Due to the theoretical encroachment that this type of initiative would have on GeForce Now, we can understand nVidia’s desire to build a customer base for its service. However, it would be nice to have a potentially feature-limited “home site license” option for enterprising individuals that may want to push the boundaries with slightly older technology.